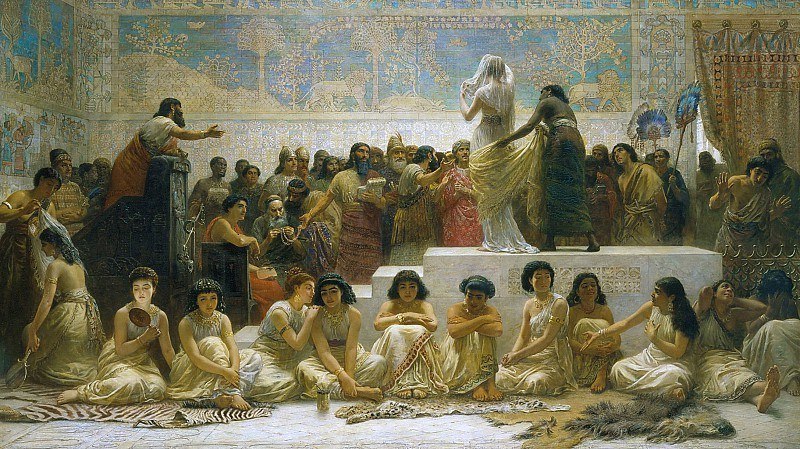 Introduction
We all have read those famous books
That talk of someone’s striking looks,
And fortunes over years amassed,
Which to the noble heirs have passed.
The ways the heirs’ lives will unroll
The Marriage Market does control:
The institution which prevails
In life and all those famous tales.
The wish to marry never fades:
Its presence all our life pervades
While we but drag the lonely quest
And hope to find what suits us best.
Some do, although it seems that those
Exist exclusively in prose
Too sentimentally inclined,
And verses of a plainer kind.
Most don’t: they grieve and even mourn
The opportunities forlorn
When they begin to realize
The choice they made was so unwise.
The Market’s rules are cut in stone:
The poor one has to die alone
Unless he finds the Love Itself
That may ignore his lack of wealth.
The rich one always does attract,
No matter how he’ll choose to act,
The notice of the public eye
Until he’ll marry or he’ll die.

Mr. Darcy at the Marriage Market

My hero is a man of means
Who never poor estates demeans;
He is a lord but doesn’t mind
Good folks to whom most lords are blind.
His name is Mr. Darcy, which
Young ladies happens to bewitch:
The most expected one of all,
He must attend this evening’s ball.
The ball is nothing but a chance
The chance of wedding to enhance;
The ladies start to shake and sweat
When Mr. Darcy’s silhouette
At last arises in the doors.
The mothers’ mood revives and soars:
They gather in a circle tight
And Mr. Darcy’s movements sight.
Within a blink he is approached
By two old women trained and coached
To be the sweetest of the lot
And counterbalance any plot:
Their task divine’s to introduce
The creatures able to induce
Affection to a single lord
And then in gossips find reward.
They now escort a would-be queen
Who thinks she needs to intervene
In Mr. Darcy’s solitude
And his seclusion to conclude.
They start to talk, but something’s wrong:
It takes the lady much too long
To Mr. Darcy’s words respond:
She is indeed of him too fond
And misses all his jokes and jests.
The music finally suggests
The conversation to postpone
And step inside the dancing zone.
They do, but when the music ends
The lord observes his good old friends
All smoking by the fireplace
With solemn dignity and grace.
He begs the lady’s pardon and
Politely kisses her gloved hand
Before retreating to the side
Where rings of smoke the air do ride.
And yet before he settles down
Among the masters of the town
He meets John James, a fellow whom
Some find another splendid groom.

“Good evening, John.” “The lord himself!
How is your noble mood? How’s health?”
“I can’t complain. And how are yours?”
“I’m fine, let any doubt disperse.
I saw you dance with Lady Jane…
How was it? Will you now complain?
Or did you take the baited hook?”
His friend assumed a graver look:
“She is indeed a charming girl,
Her teeth remind of fairest pearl,
Her eyes are bright, her dress is red,
But overall… she’s underfed!”
“They kept her thin so she would please
Your eye with elegance and ease.
You’ve always been too harsh a judge!”
Said James and gave him quite a nudge.
“Perhaps I’m harsh, but I won’t take
The ostentatious and the fake.
All I demand’s a simple must:
I need a wife whom I can trust!”
“Why don’t you trust this lady frail?
She has no hoofs, nor horns, nor tail,
To questions wittily replies,
And looks so deeply in one’s eyes…
Sometimes she even speaks in verse!”
“That trick is easy to rehearse.
And yet, it’s not the splendid Art
That’s truly precious to her heart:
The thought of wealth her reason haunts
And money’s all this lady wants.
I bet, whatever is at stake,
She knows how much per day I make!”

Thus spoke the bachelor and lord
And truth imbued his every word…
But what is truth? A simple fact
That leaves the state of things intact.
Meanwhile, the candles start to fade
And hoards of guests the hallway raid.
The ball is over, time to leave…
The poor young ladies deeply grieve,
In parting bows their bodies bend
And wonder how their ways to mend.
The mothers’ eyes are filled with pain:
Another evening’s passed in vain!
The cause of sadness bids “Goodnight”
And is remarkably polite
To all the young and older fruit
Of every famous clan and root.
Then, with perceptible relief
He tells his coachman something brief
And steps inside a carriage rich
Where all his thoughts shall swiftly switch.
No, Mr. Darcy wasn’t struck:
In fact, he didn’t give a… thing
Of all the nervousness and buzz
Around him, for he never does.
His is no wife composed of lies
Whose bloom away so quickly flies:
It is a lady of respect
Whom Mr. Darcy does expect.

Love Poems – Rhyming Love Poetry For Her by D. Rudoy